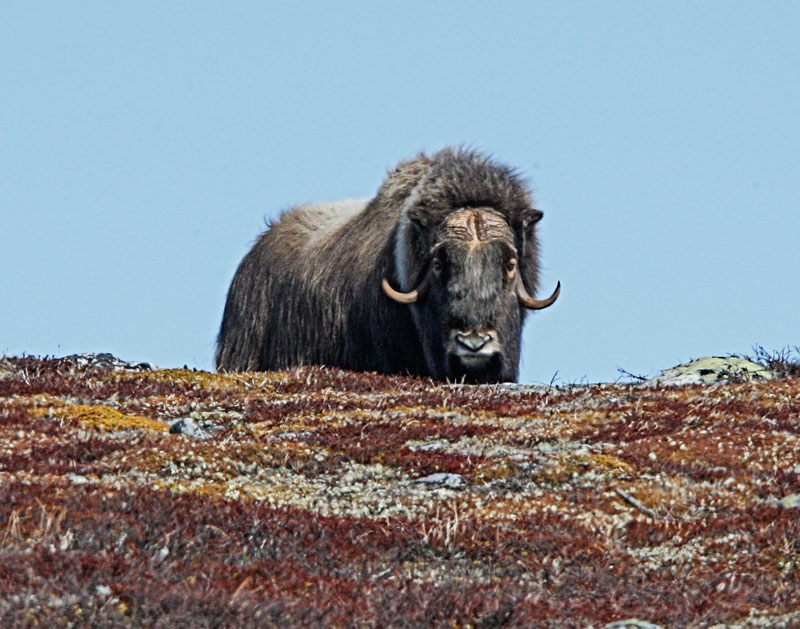 The aim of the Muskox centre

The aim of the centre is to preserve the breed of wild muskoxen in western Härjedalen, in part by reducing the stress that the disturbance of people trying to spot a wild muskox will bring. By keeping the muskox for display in the show corral we reduce the interference of the wild muskoxen on the mountains nearby. We also keep the muskox to breed new calves that later on can be united with their wild friends, and in that way mixing up the genetic pool, saving the species from inbreeding.

By visiting the centre you help us fund this important work, and at the same time you get a nature experience you’ll not soon forget!

The entire centre is about 37 acres in size and consist of 3 different corrals. One for display, one for breeding and one for research.

Guided tours are arranged every day and starts out at Härjebrygg in Tännäs village. From the high bridge in the display corral you can study the animals up close as one of our enthusastic and knowledgable guides tell you all there is to know about the muskox and their habits. 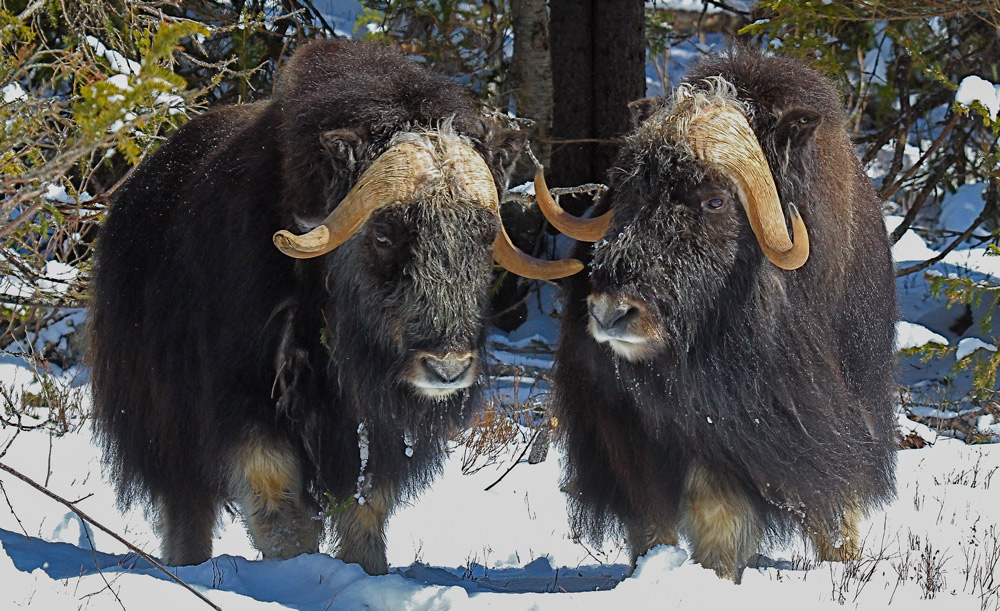 The muskox is one of the last of the prehistorical animals that still walks among us. Fossils suggests that the muskox lived side by side with the mammuts and the woolly rhinoceros in scandinavia 30.000 to 44.000 years ago.

In the beginning of the 20th century the only living specimins of the muskox were living in the northern parts of Greenland and along the icy coast in Canada. Several attemps were made to reintroduce the animal to the Spitsbergen on Svalbard and the scandinavian peninsula.
After World war II a group of norwegian trappers brought 27 calves over to Norway from Greenland. Only 11 of the calves survived the journey, and they were later released in Dovrefjell where their decendants live to this day.

The muskox that wandered into Sweden in 1971 belonged to this herd, and the became the ancestors of the muskox that roam the mountains of Härjedalen today. In the 70s the herd got to be as many as 30 animals, but the numbers swindeled in the 80s due to the increase in disturbance from snowmobiles and inbreeding.

In the last 20 years attempts have been made to introduce new animals to the herd in order to improve the genetic diversity, resulting in a muskox bull with a good genetic mixture, half swedish and half Greenlandish.

In 2007 the Muskox centre was founded, and we are continuously working on improving the conditions of all the muskox in Härjedalen. In 2013 we were able to integrate our calf Idun into the wild muskox herd.

In the winter time you can find the muskox in the cold and barren lands above the tree limit where they dont have to plow through the snow, and where grass and the scarce vegetation to eat is more easily available.

In the winter the animals metabolism is lowered and they in large part live on the fat reserves they built up during the summer. In the summertime the muskox wander down into the forests at the feet of the mountain where they feed on barque and herbs. The bulls will often separate from the rest of the herd.

When mating season comes around in July, lasting until september, the leader bulls have to fight for their position in the herd. This demonstration of power is one of the most impressive ones nature can provide. The bulls will rock their heads back and forth with their sight locked on eachother. Suddenly they set of, smashing their heads togehter in a heavy collission that can be heard far and wide. As their skulls are well prepared for the fight, this procedure can be repeated up to 11 times before one of the bulls surrender.

The muskox of Härjedalen have their wandering routes set out for them since many years back. During winter they can be seen in the mountains around Tännäs, and then they wander back into Norway in the summertime. However, your chances to spot one are very slim. A visit to the Muskox centre is a sure bet if you want to behold these mighty creatures!

The latin name of the muskox is Ovibos moschatus. Ovibos is the latin name for sheep, and bos is the word for bull. The inuits call the muskox Umingmak – The bearded one. They are part of the biological subfamily Bovinae, the same as aurochs, mouflon and alpine ibex. Their closest relative is the Takin from the mountains of central asia.

The muskox is about 200 to 250 centimeters long, 130 to 165 centimeters high, and weighs 250 to 500 kilograms. They bacome sexually mature at age three to four. The calves are born in May and weighs around 7 kilograms at birth. They lack the long hairs their parents have grown, and are therefore more sensitive to cold weather.

In the spring the animals will shed their underfur. Since the underfur is the wool closest to their body it will work its way up through the outher layers of wool, and fall of in chunks. A grown muskox will shed approximately 2.5 kilograms of underfur in one spring. The wool is calles Quivit, and are among the worlds warmest and most valuable natural fibers.

The muskox have only one natural enemy apart from humans, the wolf, and their defence strategys have evolved to protect them from being attacked by wolves. When a pack of wolves attack the muskox herd will gather in a circle, faces out with the calves in the middle. If the attack comes from only one direction they will instead form a wall. Wolves that get to close will be object of fast powerfull attacks, often resulting in the wolf being impaled on the muskoxes horns.

Unfortunately their defence has not proven quite as effective againt human attacks.

If you ever meet a muskox you have to pay close attention to their signals. If they get up and huddle together, this means that you are too close and they see you as a threat. A single muskox, lowering their head and rocking it back and forth means its preparing to attack. The last warning is a snort, the muskox will launch at you trying to impale you with its horns.

You can’t outrun a muskox. If you are to meet one you’d do best in turning away and slowly walking the other direction. The muskox is not bloodthirsty, but they are easily threatened. The best way to spend time with the muskoxen is through a binocular, or at the muskox centre.

They look like bision, but are more cloesly related to goats and sheep.

Through binoculars the muskox will look like an enormous and mighty beast, especially when you see them running along the mountain. Nearby they loose some of their menace and but they are still impressive to behold.

Despite their name the muskox don’t produce musk. They don’t have the glands for it. But they do have fragrance glands below their eyes and will excude a potent smell during mating season, but it’s not the smell of musk.

”If you’re downhill from a muskox you’re not in any danger – they can’t run downhill”. This is an old myth that you’d regurarly hear when the muskox were still a newcomer in Sweden. However there’s no truth to this statement as the muskox can run impressively fast both up, down and sideways.

Is the muskox dangerous? The muskox only wish to leave in peace on the mountain, not disturbing others, and not being disturbed in return. But if you’re reckless and get to close the muskox can be a deadly foe.